Chapter One, in which Kizzy goes to Lilliput and Percy becomes undone by a chicken

This past weekend was the long-awaited yearly clinic with Alexandra Kurland.  I must start off by saying that the host, Caroline Albert, gets the Energizer Bunny award of the year from me.  With two school-aged children, four dogs in various stages of training, 8 horses, and a startup bustling dog training and daycare business, somehow she invited us into her home and barn and even cooked fabulous meals for us for three and a half days.  Her businesses are Click for Confidence (equine) and The Grateful Dog (canine).  A year and a half ago, she and her family (kids plus husband Wayne who is a farrier extraordinare) rescued a weanling colt.  The photos were heartbreaking: emaciated, barely strength to stand, covered in rain rot which came off in chunks, structurally unsound, one could only wonder what kind of future this poor thing could have.  Below, a photo of him this past weekend.

When we arrived at the farm on Friday late afternoon, we were a truck and trailerful:  Percy, Kizzy-as-companion-to Percy, Eloise the Jack Russell, Sarah Memmi who traveled down with us for wonderful conversation and support, and myself.  I unloaded Percy who couldn't figure out which way to look first and Sarah unloaded Kizzy who saw there was grass so all was well in her world.  Percy has an amazing ability to turn into a giraffe when he needs to see all the world at once and so with head held high, we proceeded toward the paddock which Caroline had waiting for us.  As we approached, a small head and body appeared around the corner of the barn.  One of the farm minis had snuck between some rails and ended up in assigned paddock.  Had Percy been able to raise his head even higher at this astonishing sight, he would have.  Caroline's daughter grabbed a lead rope, lassoed the escapee and returned him to his own paddock.  We opened the gate and entered with Percy and Kizzy.  The mini returned.  With reinforcements.  And attitude.  We now had two minis in the paddock with us and they seemed rather incensed by the visitors so they skirted Caroline's daughter who was trying to catch them again and presented themselves front and center.  At 12 hands (which may be generous) Kizzy has never towered over anything before.  A bit concerned at what Percy was going to do about this situation, I nonetheless had to giggle at the Lilliputians.  Sarah handed over Kizzy's lead rope and the minis were once again captured and led off to their stalls.  Relieved that Percy hadn't ended up splayed out and staked to the ground by a miniature race, we proceeded to settle everyone in.

Saturday was Day 1 of the clinic, a day which Alex sets aside for data collection.  She observes horses and handlers and begins to lay her plans for the work to come.  Our assignment is to work our horses as we would at home and see if the behaviors are all in order.  We could either proceed or back up as warranted.  The previous evening I had said that my goal, if Percy was Percy, would be to work on some emotional control.  All in all I had been pleased with how he had handled the Advance of the Minis and was drooling over the lovely flat sand arena, unlike anything we had at home.  What fun it would be to work in there.  Alex later quoted John Lyons saying that we can have all the training in the world, but horses being horses, things happen and what are you going to do when an ostrich walks up the drive?  Well, in our case, the ostrich was a chicken.  A rather attractive laying hen had ventured from her pen to graze in the grass next to the paddock which Percy and Kizzy were in.  Percy was alarmed. 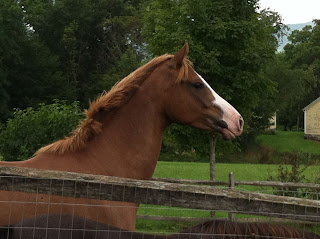 He stared, he blew, he retreated and advanced.  He clung to Kizzy.  He did his giraffe imitation.  The chicken was unconcerned.  She did her little chicken walk around in the grass, searching for bugs seemingly without any knowledge of the large horse she was intimidating.  Percy was a farm boy but our chickens were in the other barn and he'd never seen them.  Alex watched from the barn door as I put his halter on.  He obligingly lowered his head into his halter but shot it back up when I opened the gate and went onto the grass where the chicken was.  She had puttered over to the other side of the lawn.  I told Alex that if I was at home, the first thing I would do would be to address the chicken.  Not in a formal commencement speech sort of way, but in a more casual introduction of "Percy this is a little red hen.  Little Red Hen this is Percy".  Alex was concerned for my safety and sent us back into the paddock.  She didn't like me being on the side of Percy that would be leapt upon if he leapt.  She gave us a mat and a circle of cones in the paddock...a slightly stony, slightly side hill- just like home.   And so we went to work.  Percy settled with the familiar exercises.  He wasn't quite focused enough to show off left and right error-free but he could do his foundation exercises.  He gets fussy about just how to perfect his feet on a mat and was true-to-form there.  But he targeted, head lowered, backed (even on voice), stood for Grownups and his ears were mannerly.  His "stretch" command was only half quality (at home his nose is right at the ground as he walks).

Alex observed and made helpful suggestions.  She commented something about spending the weekend hugging him...

Posted by Bookends Farm at 7:54 PM