One of the newer concepts to come along in horse management is enrichment.  I first heard of enrichment as it relates to zoo animals.  Those who are responsible for animals which are meant to live in the wilds of the world and who are now kept in captivity have been working hard to come up with ways to provide stimulation.  Horses were also originally designed to live in the wild and while the majority of them could not survive in the wild today due to their breeding or upraising, they maintain many of the needs of their wild cousins living on the plains of the world. Enrichment is a way to provide for some of those needs. I have incorporated a few management practices toward this end.

Horses are grazers.  Grazing fulfills many equine requirements including nutrition, movement and entertainment. When we take away their ability to graze, either by confining them or keeping them in climates where grazing is not available, we take all of this away from them.

I start my daily routine the night before, after my night barn check, when I throw a bale of hay out the loft window into the snow below.  From there, I load it onto a sled, and drag it to the fence closest to the house.  There it sits, until I go out in the morning.  In this way, I can put hay out for the horses without going into the barn and stirring everyone up.  I drag the sled as far as I can out into the pasture before cutting open the bale.  Then I drop one flake and slog at least 20-30 steps through the snow before dropping the next flake.  I continue in this way until the entire bale is spread across the field.


This gives the horses plenty of walking to do when I let them out (and has the added advantage of getting my own blood flowing so I get warmed up). They hike out to where the hay is and have plenty of walking and eating as they move from pile to pile cleaning up the hay. They make paths in the snow and the next day I use those paths to get started, but then push off further so they keep going new places, until we get another snowfall and start all over again.

While eating hay off the ground mimics the position of a grazing horse, it is not the same as grazing.  Grazing involved tearing the grass from the ground with teeth and muscles. It involves using whiskers and muzzle to find the best parts. I have found my horses really enjoy the slow feeder nets I fill with hay for noon feeding because they get to do that combination of nibbling and biting and tearing. My own favorites are the Busy Horse nets  but there are several different brands.  The Busy Horse nets have no strings to get tangled up and since mine frequently manage to get them off their hooks with all the tugging they do, that is important to me. None of my horses wear shoes so I don't need to worry about a shoe getting caught in them.  As such, I hang them low, to keep chaff from getting into eyes and to better replicate the browsing of low bushes they would do in the wild.

One problem I have had is a certain large gray mare discovered she could just stuff her nose down into top making the "slow" part of the name irrelevant.  The only solution I could come up with is to weave the tops closed with baling twine which adds a time-consuming (and finger numbing on cold mornings) chore to the process. It's a bit dangerous as well since George, the barn cat, enjoys attacking the bale string as I weave it: cat enrichment. Putting the horses' noontime hay in these feeders makes the same amount of hay last several hours, as opposed to one hour. The guts stay occupied; the mouths stay occupied; the brains stay occupied. They are often just finishing it when I go out in the late afternoon to bring them in for the night. On days which I have to leave the farm, I can put the nets out in the morning in addition to their bale spread in the field and I know they have food and and are occupied for longer than they would otherwise. 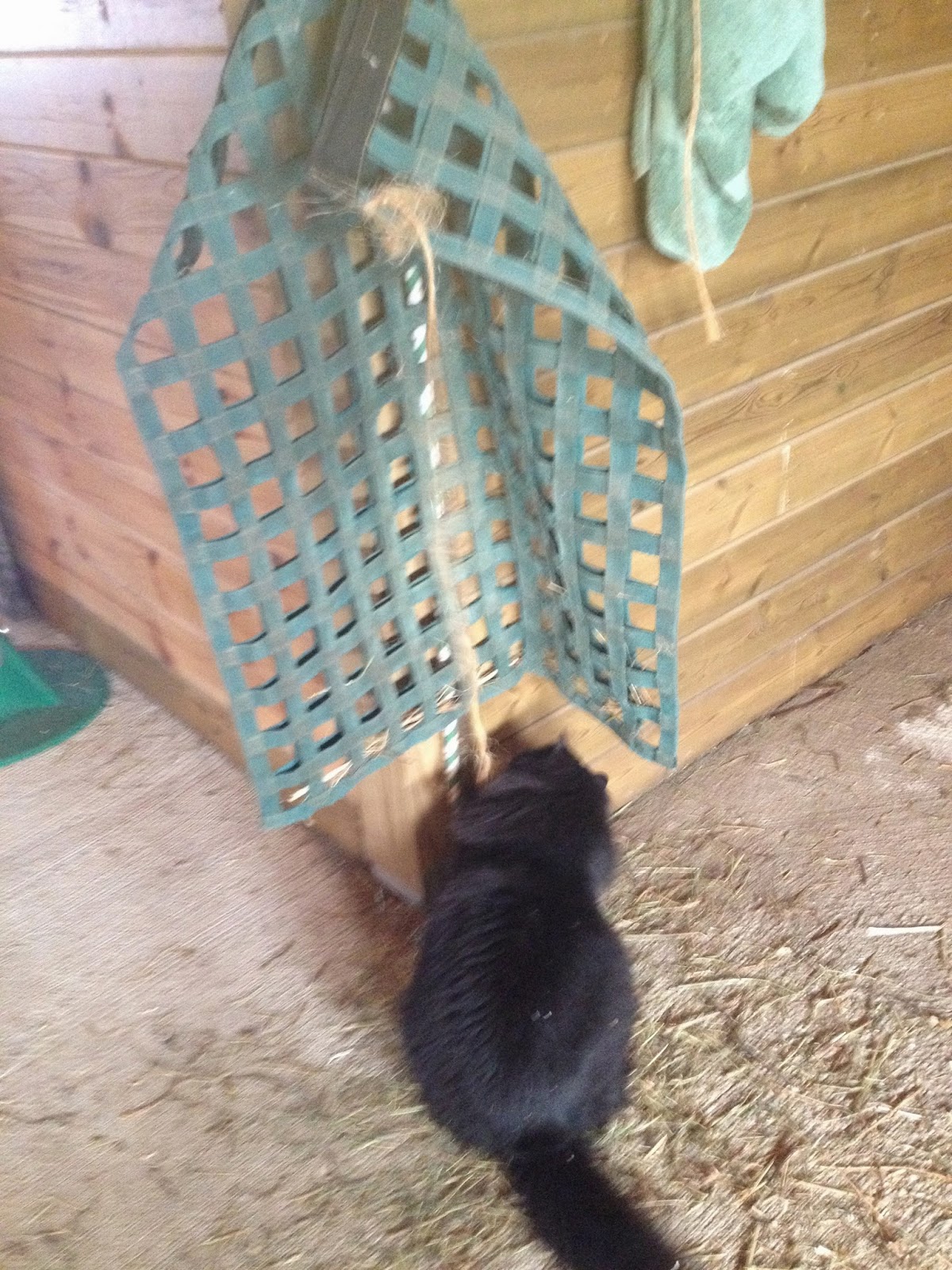 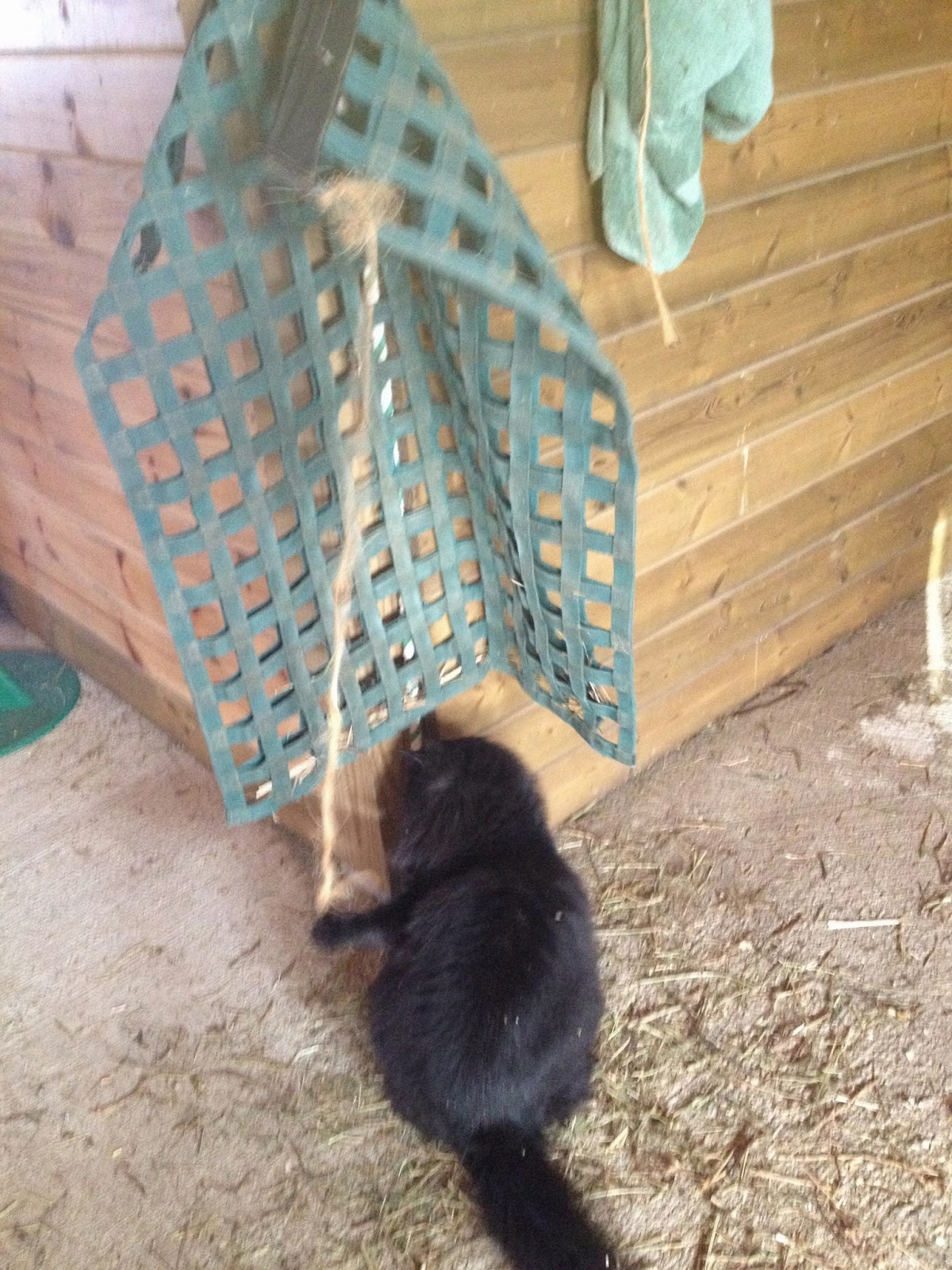 Note- on windy days, all hay is fed in these nets to prevent it from blowing away before the horses can eat it!


Another fun thing to chew on is tree bark. Please be careful to make sure you know your toxic plants in the area before offering your horses anything like this to chew on.  Our favorites are evergreens, including our Christmas tree when we're done with it, and poplar trees. The horses will strip the bark right off the poplars and make it look like a family of beavers has been through the paddock. If I get desperate toward the end of winter and have some apples which have gotten a little too soft for eating, I will sometimes adorn the poplar branches with apple chunks.

I have one other enrichment activity that I do, but not daily.  I save it for a particularly cold day or one when I think they need a little something extra. I collect plastic bottles and put a couple handfuls of hay stretcher pellets in each. I don't know that horses ever have to work this hard to get their food in nature and interestingly, I found out that it can really bring out some aggressiveness in them as they resource guard the bottles.  So I wait until I have one for each horse and then I distribute them far apart so they each have one to work at and play with.  Each has his or her own style.  Percy uses his prehensile lips to maneuver and gracefully spin the bottle so the pellets spill out.  Ande paws at it with his feet.  Mariah bats it with her whole head. These are a one-use-only toy but they're free, and even easier to recycle after having been flattened. And amazingly, rarely do I find any pellets left in the bottles so they must get them out before really squashing them.


All these things help to keep everyone a little less bored through the long winter days as we wait, not so patiently, for Spring to return.

Posted by Bookends Farm at 1:20 PM

Interesting point about the haynets letting them bite and tear in a way similar to grazing, hadn't thought about that. I think you just provided an explanation for a behaviour I noticed my own horse doing the other day. :-) Also love the idea with the bottles!

Jane, I took your idea of using empty milk jugs and just tied some up to my fence here and there so the horses could bang them around. The snow is deep here so I wasn't sure if it was a good idea to put anything in them or not. The first day Red spent about 2 hours banging one around (he must have been really bored) and now I see Aurora up there biting at and banging them on a regular basis, so even empty, they seem to be fun.