So now I had a horse who was jumping out of of his paddock whenever he wanted. If they had been given a new section of grass, which happened every day or two, he was happy to stay and eat. It didn't take long for "the grass is always greener on the other side of the fence" to set in and he'd hop out. There was a particular strip of grass near the house that was incredibly thick and lush. It's where the runoff from the barn paddock occurred, so it was heavily fertilized. That is where he would go to as soon as he was out. It was conveniently located beneath the house window and so I knew as soon as he had escaped. This only occurred a few times over a day or two while I wracked my brain for a solution.

I raised the fence as high as I could without risking the ponies escaping underneath it. Scaling height was not a problem. Giving him fresh grass only kept him busy for part of a day. Finally, I took a chance and relocated their grazing to the far end of the field. It meant giving up on a section of grass I really wanted them to clean up, but I started them over on regrowth as far away from the tempting spot as possible. I also left in place the border fences of the paddock they had been, so that he would have had to jump three fences and go a distance from his buddies to return to his desired grazing. That did the trick. I was on overwatch for several days before I could relax, while realizing that it was only a short term solution.

At this point I had:


I had to set it up instead as:
Problem solved. Temporarily. As summer turned to fall, I was careful in how I arranged paddocks and that he had plenty to eat each day so that we did not experience a resurgence of the jumping. He was eventually turned into the paddock with the lush grass and given free access to it.

That solution lasted until all the fall grazing was gone. Once the good grass had been eaten from the rotational grazing, I opened the paddocks up to larger and larger spaces so that they could forage for spots they'd either missed or been too fussy for previously. They get a lot less fussy as the fresh grass stops growing. They soon had the entire field to play in and hunt around in. Which is when Percy realized that the hayfield which hadn't been mown since the end of summer had regrowth far better than what was in their pasture. And he jumped out again.

At this time of year I had to realize that there was nothing I could give him as a reinforcer inside the pasture which could compete with the grass he was finding in the hayfield just on the other side of the fence. I could have made it harder for him by increasing the height of the fence, but that meant I would have also had to add an additional strand to the bottom for the ponies. I knew once we got snow that would just be buried and cause more problems. Hay kept him happy short term but before it was even cleaned up, he chose to jump out for dead grass on the stem over dead grass from a bale.

I had to confine them to the paddock near the barn, as much as I hated to do so. Snow came and covered all the reinforcing grass. I gave it another try. He wasn't that easily discouraged. Whether he remembered, could smell it, or just took a chance, he jumped out and was soon digging through the snow for the grass underneath.

This brings me to the other reinforcers for jumping out. Me. Leaving him loose just increased the value of jumping out. But preventing that by going out to retrieve him was also reinforcing. He'd hear the door open, pick up his head, and trot right to me. At that point I could have put a halter on him and returned him to his confinement...but that would have been connected more closely to being caught than to jumping out. Had I done that more than a time or two, he wouldn't be so foolish as to be caught. So yes, I offered him a peppermint or a piece of apple and he happily followed me to the barn, sans halter. We'd play a bit together before I put him out with hay (to bring the other horses back in) and I'd close the gate to eliminate access to jumpable fences.

Finally we had enough snow that I thought he might think twice before trying to jump in the deep stuff. I put hay out far from the house (interestingly, he never tried to jump out from any other part of the fence) and after several days was relieved to see him staying in. Well, except for the days I was a little late getting out for chores in which case I'd look out the window to see him using teeth and neck to dislodge the fence posts so he could step out. And yes, he'd watch the window for me as he did it. There are advantages to being a reinforcer oneself, but sometimes disadvantages.

Last week (we've made it to the middle of January), I was a little late writing up some behavioral follow ups for clients and it was dusk by the time I left the house to do afternoon chores. I hadn't seen him playing with the fence post so I was concerned when I only saw four, not five, equine figures waiting for me. I squinted. All I could see were white markings in the dusk. Rumer's paint body was easy to see, and Kizzy's blaze and even Ande's strip were there. Stowaway's spotted rump was visible. But no big blaze and stockings. Where the...

For the first time I hoped he had finally figured out how to do the snap combination on the barn doors and had gotten in there but when I hurried into the barn, no Percy. No one seemed upset so I couldn't believe he'd gone far and only hoped he wasn't lying out in the field with a broken leg. I dashed down the aisle to the far end of the barn and slid open the doors. 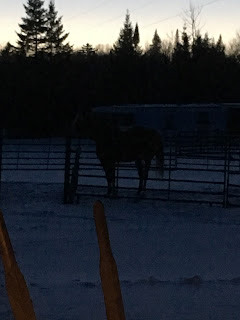 Through the dark I saw him in the pony pen. The gate was wide open and he stood looking at me interestedly.
"What are you doing out THERE?", I asked.

Once again, I was faced with what to do now. I felt I had to reinforce him for coming to me, especially since it was dark and cold and he was oh-so-willing. I did not click and treat, but simply let him follow me into the barn and closed the doors behind him. I knew that being locked in his stall would feel punishing, when the others were still outside. Instead, I let him do one of his favorite things which was to explore the barn while I prepped stalls for the night. He wandered in and out of the different stalls, took a bite of a hay bale in the wash stall, poked his nose in places that interested him, and generally behaved like a dog until I had all the stalls ready. Then I put him in his own stall and quickly brought the others in.

Did this reinforce his coming to me? Did it reinforce the fence escaping? There would be no way to know until I saw what he did next time.

To Be Continued!
Posted by Bookends Farm at 8:27 AM