Novelty in Training and Enrichment- the Equine Segment

My husband has fried eggs, toast with jam, orange juice and coffee for breakfast. Every morning. Ever since I've known him (over 30 years now). For special occasions (somebody else's special occasion), he'll eat waffles or pancakes, but given a choice, the menu never changes. Novelty, when it comes to breakfast, is not appreciated.

The rest of us usually appreciate some novelty in our diets and in other facets of our lives. The rest of us includes the animals in our care.

The horses have made this very obvious in the last week. They have been eating hay and only hay for many months. It's their version of eggs and toast with jam. They also get soaked hay cubes as a vehicle for supplements...correlating to the orange juice that washes down the vitamins. But they are ready for some novelty in this white washed world that is northern New England in winter. They want something bright green- all the different flavors of fresh native grasses, weeds, wild strawberries, dandelion leaves, and more. I can't give them that for another couple months. I throw hay in their stalls and they hang their heads out to nicker at me. I hang hay in nets outdoors and then come to the barn and hang their heads inside and nicker at me.

Hay nets, hanging or in the snow, are good for horses. Eating from them is closer to their natural grazing and browsing habits than eating loose hay off the ground. But the posts they hang from aren't portable. The view never changes. The flavors never change. The weather changes, but...not enough.

This morning I put everyone out with their hay nets. I carried one bucket of hot water out, dumped it into the tub and returned to fill it again. After it was full, I took a hay net out to the ponies before dumping the next bucket. I forgot I hadn't triple locked the door. Percy can manipulate the sliding latches, and the screw eye turn. It takes a double ended snap through the screw eye to bamboozle him. When I am going back and forth, I often skip this final step because it's a pain with heavy gloves on and I know I'm going right back through. In the time it took me to take hay to the ponies, he was back in. 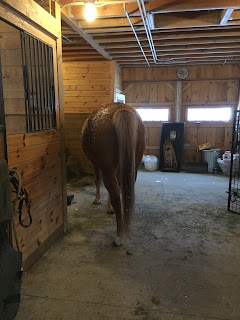 He had left his friends, hay in both hanging and ground nets, the wide outdoors after being in all night, and let himself back in the barn to snuffle through the scraps on the floor of the barn aisle. I shut the exterior door and let him play. In the next hour, he had a blast enriching himself. He ate scraps off the floor and out of the hay cart. He ate some of the low sugar hay usually only forced on the ponies. He chewed on the handles of the wheelbarrow (until I shooed him away). He grabbed my pitchfork handle (a game I allowed when he was a baby). He read the sign on the wall. 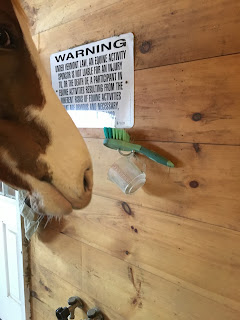 He tried to turn on the water. He walked up and down the aisle. He crinkled the plastic shavings bags. He checked out the view from the other stalls. At length. 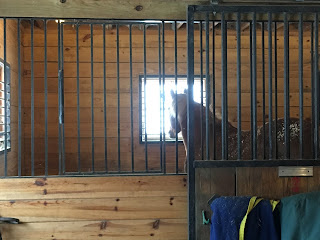 The only stall he didn't go in was his own. He was very familiar with that room already. He stood in the other stalls and put his head out the grill openings to see what he could reach from there. Then he went out into the aisle and tried another stall. He played with the blankets hanging on the doors.

Finally, he just started following me around. My big red dog. I went in to sweep a stall; he followed me in and watched. I walked out and he followed me out. I stopped and scratched the itchiest places he can't reach himself.

All the while, his friends were outside eating.

I let him wander and play until it was time to turn on the blower. I didn't want him in the barn with all the dust, so I got a handful of treats and targeted him back through the stall he had entered, out the door and then did the triple lock so he couldn't get back in.

Cabin fever is not limited to humans. And just because you can be outside does not mean life is always enriching. Sometimes you need some novelty for enrichment.

On my Dog Chapter blog, I will add a post of using novelty in training.
Posted by Bookends Farm at 2:08 PM