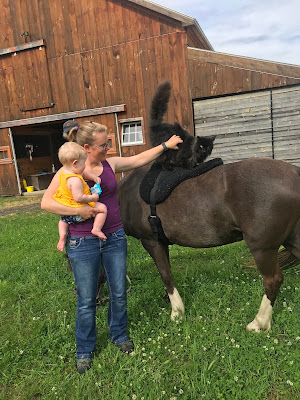 I posted this photo to my Instagram and Facebook accounts yesterday and only afterward wondered if I was contributing to irresponsible behavior ("let's put the cat up there. hahaha!"). So now I will give the background and explanation, hoping to exonerate myself.

The "training plan" for the day was simply to give the child an experience on a pony. As is often the case, training plans need to be adapted.  Sometimes that means you put the learners away and rethink your plan.  Other times, if you have enough experience and knowledge of the individuals, you can adapt the plan in the moment and keep going.

While it may seem silly to discuss sitting an 11 month old child on a pony as a "lesson plan", I do so to underline that I don't do things like this without thinking about them. I do not see horses, dogs, cats or any other animals as "tools" to be used by us or as entertainment for us.  When we share our lives with them, it is our responsibility to care for their physical, mental, and emotional needs as much as our own- probably more since we had the choice to bring them to our home and they did not.

There are three learners in this photo of three different species: cat, pony, and child. The original plan was to sit the child on the pony. She has a mini-donkey at her house and has sat on him before so this was not new. This pony has had many children on her back in her life so it was not new for her either. The only thing which was new was the combination of these two particular individuals. They had met in recent days and both decided they preferred hand to back contact rather than face to face! After grooming the pony to be sure she was comfortable, we put the bareback pad on so that enthusiastic little child feet didn't cause concern to the pony.

The training plan needed to be adapted when the child's body language (clinging to my neck and hiking feet up!) indicated she was not comfortable with the situation. When a learner is showing discomfort, we back off, assess, and either wait for another day or try again with an adapted plan.

It was at this point that the cat showed up.  This child loves cats.  She has several at her house.  Most live outdoors but one lives indoors and while her parents carefully manage any interactions, she has become conditioned to love cats as much as much as she loves dogs, chickens, horses and donkeys. In this situation I am operationalizing "love" as smiling widely, squealing, kicking feet and wiggling fingers when she sees them. She'd had several (well-managed) interactions with this cat in recent days and that's when the idea popped into my head to put the cat on the pony to see if that would help the child think it looked fun.

Cat history- this cat is 10 years old, lives in the barn and is very familiar with the horses and ponies.  Admittedly, I had never put him on one before but just this Spring he learned to ride on top of shavings bags in the wheelbarrow for the first time. I thought it might be similar enough that he'd be ok with it.  I didn't plan for the pony to move, just to show the child that the kitty was up there. None of the humans were small enough to demonstrate that sitting on the pony's back was ok.  But the cat was. The bareback pad would give George the cat something to hold onto (with his claws if necessary) without Kizzy the pony ever feeling it. George jumps in the barn doors, climbs over the stall walls, walks up and down the aisle and hides under things in the arena.  All the equines are very accustomed to his presence next to them, under them, and above them.

In the photo you see can see both the reinforcement being used and the body language of each learner. The child is looking at the cat and is not pulling away, nor toward, the animals.  Mom is clearly keeping her naive fingers away from hair or skin that could be pulled or pinched, while holding her close and talking to her. Being held and talked to by mom is very reinforcing. Mom is also scratching the cat's back and you can see him arching up to get more of this reinforcing tactile contact, although the camera caught an odd expression on his face. I can attest that he stayed there when he could easily have jumped off. Finally, if you look closely, you can see the pony's head down to the ground.  She is normally only on grass with a grazing muzzle which drastically limits her ability to eat.  Here she has been given a few minutes of muzzle free grass and she was eating as fast as she could.  One of the first things a horse does when nervous is pick up their head. Kizzy pony's head never left that grass.

After taking pictures, I returned to lift George off of Kizzy's back. His performance had the desired effect. 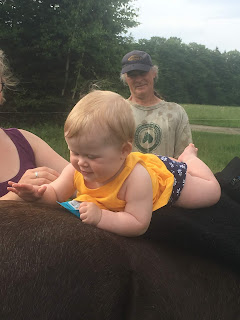