"Are you planning on teaching groups or individuals? Regardless of the above considerations, teaching groups requires a different skill set than teaching individuals. This is especially true of teaching groups of kids.  You really do need eyes in the back of your head and the ability to juggle flaming swords to teach groups of kids. If you have a lineup of "broke" lesson ponies, who just follow each other around the arena, the job is easier.  But if you have creative equines, looking to find ways to earn reinforcement, the job of the instructor needs to become very creative as well!" from Part One of this series. 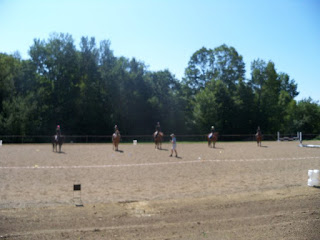 Teaching groups of any kind can be a challenge.  I have not taught groups in a strictly positive reinforcement environment so it's been interesting to think about how I would do that. The groups I have taught have been kids on their own ponies when I taught for Pony Club. At the time, I was focusing more on the riding skills and so utilized TAGteach where I could. Both TAGteach and clicker training require eyes on individuals so you'd have to set up your lesson toward that end.

If you are teaching riding lessons, I recommend thinking about whether your lessons will focus on the rider or the horse. Both are involved, but where is the focus? If you are focusing on the position of the rider, and possibly using TAGteach for that purpose, how will you keep the horse engaged? When I teach kids using tagulators, they like to pull down their beads frequently, and I often will use tactile contact on the ponies then. Not just a mindless pat, but something I know that individual pony appreciates. It's just my way of thanking them for their patience. I also sometimes combine TAGteach and clicker training though it takes a lot of focus on my part in planning and execution. Most often I do it in a Games environment. If the lesson is on balance for riders, a fun game is having them lean down and pick something up off a barrel as they go by. They need to keep centered over the pony (far more important to me than the success or not of grabbing the item), so the tag point might be "weight in outside stirrup". I will watch them carefully and tag for meeting that criteria.  But I will also set up a target after the barrel for the pony to go to.  This functions to direct the pony, so the rider does not need to steer, and if the weight shifts give conflicting information to the pony as to where they should be going, the target keeps them on track.  The rider knows that after picking up the item, the pony will continue to the target, and that is where I click, and deliver a treat.  In this way, instead of being mindless drilling back and forth for the pony, it's a fun game for them as well.

If your focus is on the horse, and you have a R+ knowledgeable group of riders, you could set a lesson and they would work on it as they rode, while you observed them one at a time to assess and assist. It would be much like a group dog training class. The space would need to be large enough to allow room for each horse/rider pair to stop for treating without the person behind them running into them.

If you don't have a large space or R+ savvy riders, then it would be better to choose an area of the arena, say a short end or, between two particular dressage letters or other landmarks. As each rider entered that space, they would work on the training skill (flexions, for example), clicking and treating under your observation. When they reached the end of the observation area, the horses would be given a break as they proceeded around the rest of the arena, while you worked with the next horses in line.

I think a big difference between riding with positive reinforcement vs traditional training is the amount of drilling which occurs. We give a lot of breaks as positive reinforcement trainers, dictated by the need to stop when we mark, in order to reinforce. There are huge advantages to this that are hard to see if you aren't familiar with the process. Every time you stop and reinforce, then you get to do it again.  Getting a break usually functions as an additional reinforcer. One just needs to build duration and chains from there, but both need to be clean, which will only happen if that reinforcement initially happens frequently. 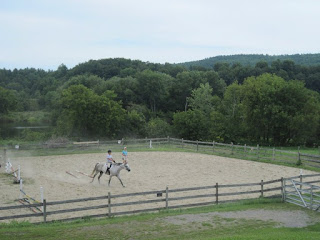 If you can set clear criteria for your rider to observe even at a novice level, you may be able to trust them to work behind your back while you focus on others, rather than having a long break. An example would be going over trot poles. If you set a single rail on the ground, and the criteria for a click is to step cleanly over the rail, the rider can easily hear if the horse hits a rail or not. If there is no hoof contact, then click! Stop and feed.  If you hear a hoof hit, then just keep riding quietly on.  And guess what? You are subtly educating your riders as well, to feel each foot as it goes over the rail, as they listen. If they are doing this behind your back, you can ask how the horse did when they come to the area you are observing. If they say she didn't earn a click, ask which foot hit. Is it always the same foot? Why is this? What can you do to set the horse up for success the next time? Etc. 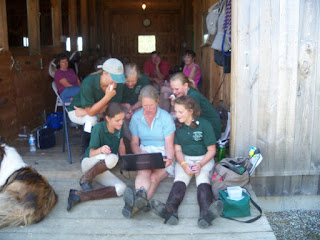 An excellent tool for teaching in groups (or individuals) is video. You can set up a camera to record somewhere along the rail or if you have parents or someone else observing, they can man the camera, only videoing particular parts. This allows you to play the video back later and point out the pertinent points of a lesson, saving the ponies from being drilled repeatedly just for the purpose of observation. We don't want our ponies practicing things incorrectly so that others can observe.  Get it on camera, use your clicker to fix it, then show it at a later time so everyone can see before and after.

Another tool which is clearly demonstrated on the TAGteach website is learners tagging other learners. You could do the same with riders. The other student would have to be on the ground with his horse in the barn, so as not to confuse it, but if the lesson was on something more difficult for the rider to perceive (size of step, whether straight or lateral), a learner on the ground could do the clicking, thus educating two human learners and the equine learner. I will do this for introducing lateral steps to a rider who doesn't know yet how it should feel so they can't click it appropriately.  I observe and click the initial efforts at a lateral step from the horse.  Not only does the click point out the right step to the horse, but it also points it out to the rider. You aren't specifically teaching the rider what to do, but you are educating their feel.

So if you are teaching a group lesson, you could set up a pattern in which you observe one part of the pattern, and maybe one or two other learners from a different class observe a different part of the pattern.  This keeps riders and horses entertained and learning while working on this assembly line of lessons. The environment should clearly cue the horse to know what the lesson is for each piece of the pattern. Ideally, the rider is cueing the behavior, but if we are working with newer trainers, it helps to have additional cues. 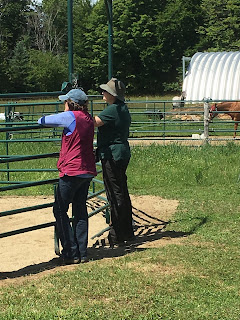 Working with a group of people who are specifically interested in clicker training opens itself to an entirely different clinic setup than I was accustomed to with traditional riding clinics. I have to remember that now, when I offer a clinic to traditional trainers. They should not plan on going home after their lesson. When one signs up for a traditional clinic, one is usually given a lesson time. If you're lucky, or the format requires it, you might get more than one lesson.  The remainder of the time, the smart people observe other lessons. Hopefully this means their horse has a pleasant place to hang out, such as a stall, rather than being tied in or to a trailer for an extended period of time. But it isn't unusual for attendees to wander away during others' lessons,  since the lesson time is designated for the person in the ring at that time. 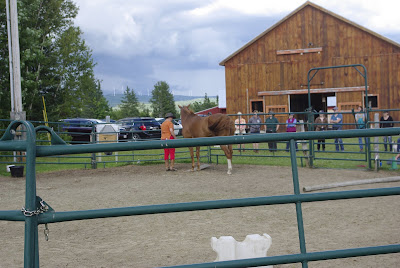 I was introduced to a very different format when I began attending clinics with Alexandra Kurland. The focus on that clinic was that ALL attendees were being taught all the time. Observing was easily as educational as working with a horse, just different aspects of the same lesson. In this format, one is teaching both individuals and a group at the same time. The lessons for each horse/handler pair can be much shorter but there can be more of them. Learners of all species get frequent breaks, to allow the learning to settle in, and then come out again for another go.

Whether teaching individuals or groups, I think it's important to take the time to think clearly about how to at least keep it interesting for our horses and ponies, if they are not specifically getting clicked and treated themselves.

Next time- my ponies or those belonging to others.