Rumer goes for a walk 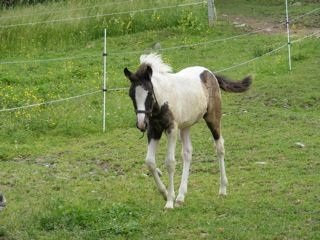 Today I spent some time with Rumer. Rumer will be two years old on April 23 of this year. She is a medium pony with paint markings. As the only filly of the three foals who have been born here, she is interesting in her differences: not sure how much is personality and how much is filly, but she's more about heels than teeth! She has gotten much much better with clicker training- more interested in interacting (almost to a fault- right at the gate when I try to go in!) and hopeful that there will be fun games to play.
I would like to teach her to drive this summer as I think she will be very cute in harness and it will give her a job and me a reason to be consistent with her training. I told my farrier I was looking for a good used cart to start her on and within a week, I got an email....farriers are great grapevines. So today I went and looked at it and it looks in very good shape but I need to be sure it is the right size as the pony who it was used with was only 10 h.
So when I got home, I took her out so I could get some measurements- not only height but length for shafts. This time I got her at 12.2 when I thought I had taped her at 13 h previously- it's tough when I don't have a good level spot to measure them. It was a sunny and warm day but with a cool stiff breeze so the tape was fluttering around her as I used it. A perfect experience for her and she did quite well.
Then we took a walk down the driveway, which meant passing flapping metal roofing, a truck, trailer and woodsplitter in new place, a huge new pile of round bales, etc. She was quite fine with all of that but was concerned about the footing. We encountered water running right over the top of the ground from the melting snow, mud where the snow was gone, slush, and ice! It was interesting to see her hesitate at each change of footing. She would stop and look down at it and want to get behind me rather than next to me. I did a lot of positioning her next to me, trying to be aware of what training tools I was using so I didn't get caught in a shoving match with her. She can be quite pushy with the others in her paddock and tries to do that with me as well: using her shoulders to push others around.
I think it went like this: I would let her stop and look, but when she picked up her head, she would try to push behind me. I slid down the rein and tried to reposition her, but then she'd get pushier so I'd use the Tai Chi wall to stop her. Then the hard part for me was to release when she softened a bit, rather than continuing to push back. We would do this a couple times until she set foot on the changed footing, at which point I'd click and treat; and let her drop her head to investigate again. Then she was fine until we came to another change and we'd do it all over again. If repetition builds progress, then I hope we made some good progress today! She only had one little scoot on the way back to the barn when the truck started up behind her. I think it was a good excuse to blow off a little steam. I had to give her credit for paying close attention to me when her buddies were calling her from the paddock- she never called back or seemed to miss them.
Posted by Bookends Farm at 6:53 PM