Percy plays with a loopie 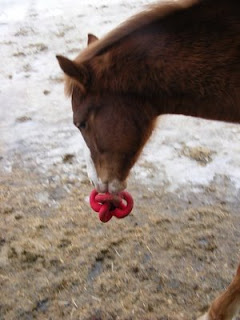 Yesterday I found a "loopies" dog toy to use for Percy to learn to play fetch with. It's very easy for him to pick up and looks like nothing else around the farm so I'm hoping he won't confuse it with anything else.
Several days ago, he voluntarily picked up my glove off the stall wall and handed it to me- it was so clever of him that I automatically clicked and then worried that I was creating a monster....an 8 month old colt (even castrated) is not one you generally want to encourage to grab and bite things! But he had learned to keep his teeth to himself and since that age does love to grab and bite, I thought it might be good for his education to have something to grab and bite and also learn that behavior is not acceptable for just any glove, toy, etc!
I introduced it yesterday- first in the paddock which was fine and got him biting it. Then we moved to the stall (for some privacy from the other horse in his paddock) and he wouldn't even look at it! I realized that all my work with getting him to leave me alone in the stall has been well learned! So again, hopefully the loopie will be a cue for him to play. I may have to remind him of previous lessons about biting etc as we go, but I might as well get that over with while I'm still wearing several layers of winter clothing!!
Posted by Bookends Farm at 12:41 PM