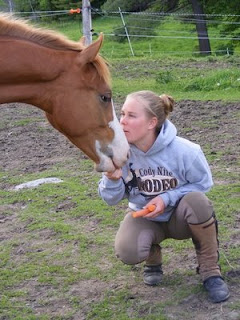 We've had crazy weather for a week which made it difficult to do much with horses or computers! Rain, high winds, hail, power outages, etc.

Percy had a scary moment yesterday and it's been interesting to look back on it. I had him on the cross ties for grooming when my Jack Russell went bounding out of the barn with hair all standing on end in that four legged bounce that Jack Russells have. I don't know what he saw, heard, or smelled but the horses all reacted, including Percy. He tried going backward, hit the cross-ties and came forward (good boy) but hit them going forward so then he went up a couple times, partially spun on his hind legs and got the tie over his poll etc etc. He never did break the ties (even though they are quick release AND I have them tied with baling twine for that purpose) so he definitely respected the ties each time he hit them and just kept looking for new ways to get away. When he stopped for a second, I did a click and my daughter and I were able to both released a side and I put a lead rope on him. He did not go up again but was still very head high so I took him out of the barn and let him go so he could run and see what was going on. But he just stood there with his buddy so I put the lead back on and brought him back in!

I did not put the ties on him but put him back in the same spot, clicked for head down a couple times and then went back to grooming him just holding the lead. He was completely fine and I was thrilled at how well he got over it and went back to his old self so quickly. He did seem to get the tie in his mouth as there was some blood on his lip and I then noticed he had also cut his eyelid. I got a small bucket of cold water and a clean rag to hold on it. It took a couple different approaches with clicks before I could find the approach that was the least threatening. Interestingly, it was to go up his face and slide over his eye from the center. That way, he didn't see the rag coming at his eye and he was perfectly content to let me hold the cold rag on it, rinse it and do it over several times. It had been quite a session so I let him out again.
I was expecting his eye to be all swollen this morning but it was fine so I'm glad I was able to get that cold rag on it yesterday. I think all that I had done when he cut his lip open was good practice. It could have made him more hesitant about treatments but inste 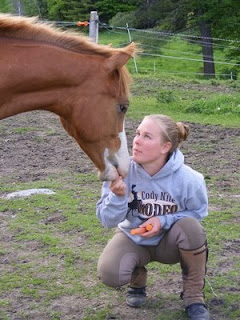 ad, the clicker-training taught him that he could handle it, tell me what was OK and what wasn't so I could try different approaches and he could go right back to our regular relationship without any damage having been done. I will be very careful with the cross ties for a while: going back to the routine I used when I first introduced them and gauging his reaction to decide how to proceed.
Posted by Bookends Farm at 5:50 AM