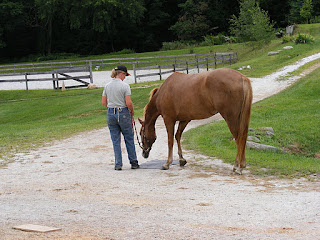 As a clicker trainer and TAG teacher, I have tried to remove the word "don't" from my vocabulary. It hasn't been easy, but it has been very worthwhile. Positive reinforcement techniques are all about focusing on what we want as opposed to what we don't want. Initially, this can tie a person in knots. Working with a young student whose horse was trying to bite her as she tightened the girth, I asked her to tell me what she wanted the horse to do. She simply couldn't figure out anything beyond "not bite me!" (yes, consideration was given to all the things which could be causing this behavior before trying to re-train it).
Step 1 in Alexandra Kurland's Step by Step book is "decide what you want your horse to do". Susan Garrett, dog trainer, does all her training in "do-land". TAG teach instructs us to make tag points of what we want. The easiest way I have found to explain this to people is to quote the title of a book. I tell them to close their eyes and then I say "don't think of an elephant". Then I ask, what is the first thing that popped into your head? In all cases, it's an elephant. But I said DON'T think of an elephant! Why did they? Because that is the way our brain works. Our brain thinks in positive images. It doesn't have a picture for "no". It pulls up the things we think about. So if we go through the day thinking "no chocolate, no chocolate, no chocolate", our brains are hearing "chocolate, chocolate, chocolate".
Having raised a few young horses in recent years, there were plenty of things I didn't want them to do. I didn't want to be bitten, or kicked, or run over for example. I didn't want them to rear, or pull back on cross ties or bolt away from me. For all these situations, I had to do what clicker trainers call "train an incompatible behavior". That meant I had to come up with things to train them to DO, that made it impossible for them to do the things I didn't want. Don't bite became "mouth closed and head away from me". Don't kick became "four feet on the floor". Don't run me over became "walk a safe distance from me". Pretty soon, these things I taught became incompatible behaviors for other things I didn't want. "Four on the floor" also meant they couldn't rear and couldn't pull back on cross ties. Walking a safe distance from me meant they couldn't bolt off.
Now there was a lot of management that went into the process as well. You don't turn your backside to a young colt and just leave it hanging there begging to be bitten. I know that colts are all about biting. Not because they are bad, but because they are colts and that's what colts do! It wasn't personal- they bit everyone- their moms, their pasture buddies, the cat. It's part of their play which is part of their education. So while I was around them, I protected my backside (and arms and legs and face) by keeping a safe distance and training them to do something else with their heads which they got reinforced for. I had to make not-biting more reinforcing than biting.
I still remember exactly where we stood the first time Percy, as a weanling "struck" with a front foot and caught me in the back of the leg. At least that's how I saw it at the time. My mind was yelling "DANGER, RUDE, AGGRESSIVE" while this little clicker angel on my shoulder was saying "reward the positive". That little clicker angel and I had quite a discussion.
"But it was dangerous", I argued.
"Keep yourself in protective contact", the little angel said.
"I can't keep myself protected every second!"
"You know horses are dangerous big animals", the little angel said, "you have chosen to work with them and specifically with young ones".
"Why can't I punish this behavior?", I demanded.
"Punishment has unintended consequences", the clicker angel said.
"LIke what?!"
"You know perfectly well"
She was right, I did know. I didn't want this little horse to fear me, fear being with me or fear offering things because I might hurt him. I taught Percy to walk next to me, not behind me, where an enthusiastic paw wouldn't catch me in the back of the leg. I taught him how to turn and stay next to me when we went through gates so I could shut it behind us (the instance that had him behind me on that memorable day).
Now he's three and even though I never punished him for it, he doesn't strike. And many repetitions and a high rate of reinforcement for being next to me mean that when he gets startled and shoots forward, it's not been over the top of me. Am I absolutely, positively, without a shadow of a doubt, sure he'll never hurt me? Nope. He's a horse. A young horse right now. He weighs half a ton and he has hooves. Accidents happen. I must take responsibility for my own safety as much as I can and hope for the best.
Posted by Bookends Farm at 9:31 AM