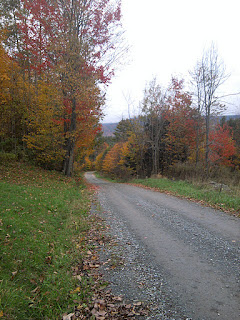 I love fall- it's such a great time to ride with no bugs, cool temperatures, and beautiful scenery. It's not hard for students to convince me to take them on a hack so we can work on riding "in the open"...something many kids and adults sorely miss in these days of disappearing open land available to ride on.
This fall, I've gotten confident enough to ride Ande with students...I needed to be sure he was quiet enough that I didn't need to worry about him sparking an unusual moment in an otherwise quiet lesson horse and also that I could focus on a novice without needing to be on alert and horse training every second. Yesterday, at the end of a short ride with a student on Mariah, I decided to introduce the rider to ditches. We'd done uphill, downhill, steep ups through low woods (in other words on Mariah, she had to duck a lot more than I did!) and I was pretty confident Mariah would step quietly over the ditch so she could practice correct position without my needing to worry that she'd really need it.
When my daughter was younger, we'd practice ditches along the road- she could jump from the road over the ditch up onto the hayfield or lawn- uphill with less worry about bucking on landing. The town road crew had cleaned out the ditches with the grader after Hurricane Irene, so they were clear and obvious. Mariah was a champ and stepped carefully into and then over the ditch- the only challenge being keeping her head out of the deep grass on the other side. Ande, however, wasn't too keen on following her. As sure footed as he is, he is the one who still likes to leap over the little spring on the way to turnout in one of the fields when everyone else will simply splash through. I only had one peppermint in my pocket and I bit it into as many pieces as possible. Every tiny step toward the ditch (he had no problem going right to the edge, but then got worried), got a click and a tiny peppermint bit. The hardest thing of all was not going into complete "do it!" mode. Amazing how old habits kick in. Luckily, I knew the student's ride home was coming soon and so when the peppermints were gone, I shushed all the little trainer demons in my head who were telling me I couldn't let Ande "win" by not going over the ditch. I hopped off and led him over it. Sure enough, he leaped high and wide enough to make a Training horse proud. I let him graze and then led him back and forth a couple more times. Each time he avoided the possibility that any alligators in the ditch could reach him. Each time he got 10 mouthfuls of grass as reward and then we went back to the barn. 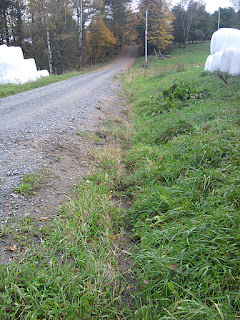 the ditch full of alligators
Today, I put a pouch full of treats on me and a halter and lead on Ande and we returned to the ditch. Standing him in the road, I asked him to step a tiny step toward the ditch. I knew he would gladly leap the ditch but I wanted him in it. Some schools of thought say never to teach a horse to step in a ditch because in competition, you want them going over it, not in it. I decided I'd risk it because I think it will be more important for Ande to be a quiet trail pony, rather than a high level event horse. And I figured, once again, he could be my guinea pig for Percy. If Ande proceeds to be unwilling or difficult to teach to jump ditches in the future, I'll do it differently with P.
I approached the ditch the way I approach a horse who is difficult to load into a trailer. It's not about the end result, it's about each tiny step of the way. I wanted him comfortable approaching the ditch and being in it, just like I want a horse comfortable approaching a trailer and comfortable being on the ramp. If you can get that, the rest is easy- and the training sticks. It's not just a one time deal. So I only asked for 2 inches forward at a time. And I made sure those were two inches straight ahead (using the Tai Chi wall if necessary), not toward me. I did not want him leaping onto me for safety (if you've seen the Thelwell sketch of the pony with his legs wrapped around his owner's neck when he sees a mouse, you know what I was picturing). When we had gone forward 6 inches down the little slope, I asked him to back up so we could do it again. Pretty soon, he was happily going forward and back, further and further down into the ditch until- ta da- he could reach the grass. So we stood and grazed there, another couple inches and he'd forgotten all about the alligators. 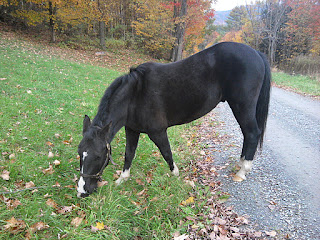 We went back and forth several times and he never again tried to leap. Next- I'll put the saddle back on and try again while mounted. I need to find a fairly level spot though because riding him with front feet in the ditch and head down in the bottom of it grazing will be a challenge!
Posted by Bookends Farm at 1:57 PM