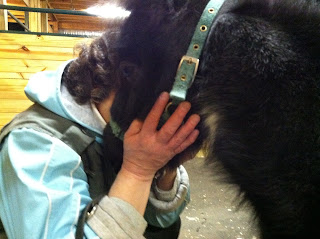 In my hurry to finish my post yesterday before I left for the dentist, I left out a couple things about the first day.  One was the joy of getting to meet Panda and Ann (above).  For anyone who doesn't know, Panda is a miniature horse trained by Alex to be a guide horse for Ann who is blind.  Ann and Alex have been friends for a long time and are partners in the Clicker Center.  Another partner is Mary who lives at the farm and has her own barn for her horses.  This threesome has indeed built a great facility.

But back to Panda- of course I've heard lots about her, seen photos and watched videos but it was great fun to meet her in person (that would be my person, her horse).  She and Ann have a great relationship and it's amazing to see them go about together making it look smooth and effortless.  But Panda knows this is "her" barn too so although she spends days and nights with Ann, she comes to the barn in the evenings and has her own stall (full size!) to hang out in while Ann does chores, visits, and works with the other horses (Ann and Alex have two Iceys...not sure who officially owns whom but it doesn't really matter). 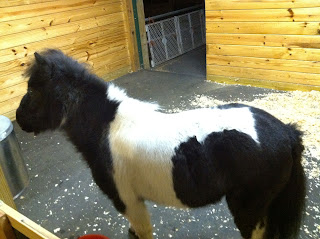 Panda invented her own game, called "Panda Catch" in which she chooses a person from a circle of people and lines herself up with them for which she earns a click and a treat and then runs off to pick her next person.  As my horses were living in the arena, the only place we had to play was in the aisle so she simply went back and forth between Ann and I.

You can read more about Panda here: http://www.theclickercenter.com/Clicker-Store-Panda-Book.html

The other thing I neglected to include was Alex's stressing the importance of the relationship I was building with Percy by simply staying with him that night.  Having had horses for a lifetime, I am very familiar with the phrase "deal with it".  Horses get put in new environments, living situations, together with unfamiliar horses or training expectations and they get told to "deal with it".  They may be observed long enough to make sure they don't hurt themselves or colic, but often, sooner rather than later, they just get left in the new situation to worry alone.  This is really a form of flooding- something unpleasant until they stop reacting.  Imagine if you are afraid of spiders and are put in a room or closet full of spiders with no way of escape.  You will probably stop reacting to them but it will be a long miserable process and may have unintended fallout...like mistrust of the person who locked you in that closet!

This issue is the beginning of my learning curve of the week.  More to come.

Posted by Bookends Farm at 7:56 AM