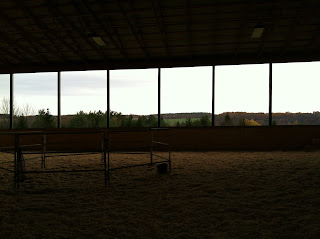 More of the view from the arena
On the second day, the formal training sessions began.  After chores and breakfast, Alex opened her toy cupboard and began pulling out playthings.  She has quite a collection of lumber from the building process so she has mats of ALL sizes and shapes.  She noticed Percy had a little bit of "far-enditis" and so the plan for the first session was to observe the level of comfort in the arena- the full space.

Both Kizzy and Percy were at liberty.  He was no longer harassing her and definitely gained confidence with her presence and participation.  With the round pen set up in the first third of the arena, we scattered the toys in the further part.  I had also brought some of Percy's own toys from home- his loopie toy that he loves to fetch, some "rail razers", that lifts a ground rail slightly off the ground, and a rail, and flat soccer cones that we play color games with.  Alex and I wandered about following her instructions to click for interaction with anything.  Kizzy was in seventh heaven.  All this attention and fun!  Percy liked to play, but would occasionally go and check over the wall to be sure the enemy hadn't advanced and then he'd return to play some more.  Whereas the previous night he had been anxious, HYPER vigilant and just had to keep moving, this morning he was watchful and not really connected to me, but nonetheless engaged in the play when he was around.

He was concerned about the far end, but willing to go there to play as long as he could leave when he wanted.  This was where my mindset was at the beginning.  Percy does not like confinement.  From his first days as a foal, he fought any restraint.  Most foals do, of course, but there are ranges of both what is considered restraint and how much fight an individual puts in.  I may have told this story here before, but Percy was the fourth foal born here in four years.  The first actually belonged to my niece who was visiting, then came Ande, then Rumer and then Percy.  While all three of mine started with CT, each year I learned more and each year was able to "let go" of more traditional training and use more CT.  When it came to first farrier visits, we just held on to Ande and Rumer.  I enlisted the assistance of my husband who is quite practiced at wrastling young calves (and bigger ones) and between he, myself, and my wonderfully patient farrier, they quickly settled down and stood for the hoof trimming.  I had concerns about Percy but we started out the same way.  In no time at all, both my husband and Percy were on the floor but my husband was the one bleeding.  Hm.  I stopped it all right there and we went to CT, no restraint and that was my rule for Percy from then on.

The reason I tell that is because from then on, I made almost everything free choice for him.  He was smart, athletic and sensitive.  Fighting him was not an option for me and he could and did learn all his life's lessons by making what I wanted very reinforcing for him.  From leading to trailer loading, he wasn't pushed at all.  He was reinforced every step of the way when he made progress and was allowed to leave when he felt he needed to.  I had a hiccup when it came to veterinary visits which included stitches in his lip as a weanling and of course castration but with the assistance of sedatives, we got through those without a fight as well...though we did seem to have some fallout from that in that he hates my vet now and that is a winter project to come.

When I was at the clinic with Alex this August, she was uncomfortable letting me leave the paddock with Percy because she saw I did not have a strong tai chi wall to protect me if he panicked.  I, on the other hand, did not want to use a tai chi wall, though it took some mental work after getting home to figure out why.  Percy's mother can be quite a wild child but in all the years my daughter had her, she had never so much as touched her during an explosion.  She was very aware of where her body was and very careful about not making contact with a person, and rarely even hit the end of a leadrope.  So I was hoping that even if Percy remained a reactive individual to the end of his days, I could feel safe in the hopes he'd be like his mum.  And I knew that if I gave him a long line, he could react and get away without going over the top of me.  By using a Tai Chi wall, I would be restraining him and I feared that would cause a fight because he'd feel trapped in that closet with the spiders.

So, to get back to Alex's indoor, Percy would occasionally find himself further into the far end than he liked, and I'd see him lift his head and walk quickly back to safer territory.  The plan for the next session would be to increase his exposure to the far end and further test his connection to me.
Posted by Bookends Farm at 7:49 AM