This year I'm trying some new hay pillows. It's not because I'm unhappy with the Busy Horse hay feeders I have. Quite the opposite. I am really impressed with the Busy Grande regular feeders that I have had for many years. In the winter they get almost daily use and they are holding up beautifully. I have three of the Busy Grande hay feeders which are big enough to stuff two or three good sized flakes of hay into and have holes that are about 2 1/4" square. I also have one of the Busy Grande Slow Feeders. They hold the same amount but the holes are only 1 3/4" square. The horses definitely prefer the bigger holes, and choose those bags over the other, such that I have designed a system as to where I put the one with the smaller holes.
For the past several years, I've had four places that I can hang the bags. Originally, my husband put four posts in for me but Kizzy snapped one right in half rubbing on it the year she got Sweet Itch so badly. And then we got the street sweeper for itching on and it was convenient to slide that down over another post. Which left me with two posts. The other two heavy duty screw eyes are in the shed attached to the barn.

The shed is only two sided, and if the wind/snow/yuck comes out of the south, the warmest driest spot is on the western side of the shed. So that is where I put the bag with the smallest holes. My reasoning: whoever has to struggle with that bag, at least is in a cozy spot to do so. Whoever is out in the wind and the snow, can at least eat more in less time.

Let me back up a little as to why I use hay bags at all. I do believe that horses should do a lot of eating off the ground. Studies have shown that their nasal passages drain well that way and it helps prevent respiratory problems. However, the studies I am aware of were done ages ago and compared eating off the ground to eating out of hay racks or bags mounted high on the walls of their stalls.

One of the reasons I chose the Busy Horse bags are because they have no strings to get tangled in horse legs. They have two rings in the top which I use heavy duty snaps to attach to heavy duty screw eyes in posts or walls. My horses are all barefoot and so with no strings and no shoes, I am comfortable hanging these bags low enough so that the bottoms are at ground level once the snow comes. The one in the video above is higher, but I'm ok with that since the horses rotate from one to another. They spend some time with their heads at all heights. Horses are also browsers of leaves and brush, so eating at higher heights is not completely unnatural. If I only had one horse and one hay bag that horse ate all her meals out of, I'd be more concerned about the neck issues that some people worry about.

So why not just feed on the ground? I do, in the morning, when the weather allows. As long as it's not too windy, I spread one bale of hay out in the large field before I turn them out each morning. I spread the sections far apart so they have to walk a lot to get from one to another. However, there are some mornings that it is so windy that the hay blows away before it hits the ground, to say nothing of before the horses can clean it up. I don't like using good hay to mulch the next field over while my horses go hungry. So the hay bags keep the hay in place long enough for them to consume it!

It also keeps the horses busy longer. This morning I put a bale out in the field and they had finished it before I left the barn an hour and a half later. I then put another bale in the 4 hay bags and 2 hay pillows. Four hours later they are still picking at those: much better for the equine digestive system.

Finally, it's nice for my schedule to be able to fill the bags at morning chores, and then just hang them, not far from the barn, whenever I get a chance to during the day. It's much easier than putting another bale on the sled and having to hike out to the field while the hungry and bored horses are trying to pull hay off it. They can exhibit self control long enough for me to get a bag hung up.

Note: Back when Mariah was here, she was big enough and clever enough that she'd stuff her nose down into the bag from the top, eliminating the "slow" from the equation. It was quite tedious, but I had to weave them closed with bale string each time to prevent her from doing that.

And that brings me back to the hay pillows. They are designed to be thrown right on the ground which is more like grazing. I think I initially got them for the ponies when they are in their own round pen. I have other nets I hang for them but I didn't like doing it all the time. With no posts in their pen, I could just fill the pillows and throw them in. 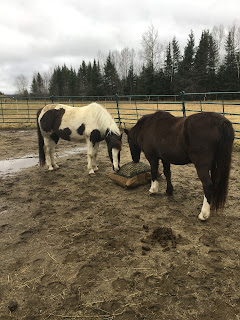 When they first arrived, I was disappointed. I thought there was no way that the zippers which held them closed would hold up to the job. In addition, the reality of the filth they could be in on the ground was disheartening. No matter how clean the pen was when I put them in, by the end of the day, there would be manure at the very least for them to be dragged through. If the ground was at all muddy, the bags would be too and if they got flipped over, yuck. A time or two they were so gross at the end of the day that I needed to hose them down and hang them to dry before I could use them again. They were hard to find, being brown, they were camouflaged into the brown muck. Then when freezing weather came, they froze into nasty smelly things so I quit using them.
But when winter came, I decided to try again. And I'm amazed how well they are working. The ground is clean and snow covered (we get fresh snow quite regularly) so they stay clean. The zippers continue to work even when full of snow at single digit temps when being tugged on by my gloved fingers. They are frozen into shape when I bring them in at night, but 12 hours hanging in the wash stall with the horses warming the space thaws them enough that while they are still snowy and a little stiff, I can open them and re-stuff them the next morning.

One of the greatest things about them is how easy they are to throw over a fence, without losing half of it to the wind! Admittedly, they are not used every day, and we are still in December (one more day!) of the first winter. So I cannot say that they will last as long as the others. The ones I got don't hold as much and they were close to the same price. But they do give me options so we'll see how they hold up. The horses do paw at them and flip them around a lot...part of the fun.

This fall my husband put four new posts out in the field for me for those mornings when it's really windy AND I won't be home at noon. I've ordered more of the Busy Horse Grandes so I will be able to hang eight out in the morning which should keep everyone busy for the day!

Posted by Bookends Farm at 12:29 PM No comments:

In my recent blog for the dog training part of my business,   (https://dogchapter.wordpress.com/2016/12/10/indoor-training/) I linked to a 12 Days of Christmas training series by Donna Hill. I also mentioned that working on husbandry skills is a great winter project. Since then I have been keeping a list of skills to see if I could come up with twelve for my own 12 days of Christmas project.
Here is my list:


I'll focus on each one of these per day, as both a review of how our skills are, and looking for ways to improve them. Each one can be incorporated into a daily grooming session or chore time.

As always, it's important to work on these before you need them. An injured horse does not need added stress of treatment and handling she has never received before. A professional (chiropractor, vet, hoof trimmer) does not need the added stress of working on a horse who is not familiar with what is being done!

Posted by Bookends Farm at 1:10 PM No comments: